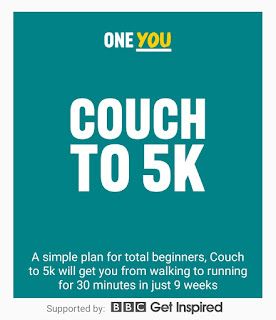 So, nearly 9 months after a bad flare up of tendonitis put paid to my previous attempt to do this, I've finally taken the plunge and decided to start again. Now that the evenings are that bit lighter and definitely getting longer, there didn't really seem like any real reason for putting it off any longer.

I will be honest, the thought of going back to the very start filled me with dread; I simply couldn't face those seemingly endless (although in fact, only eight) repetitions of one minute, so I decided to see if I could pick up where I was forced to leave last time around on week 2. The worst that could happen was that I found I couldn't do it and would need to go back to the very start after all.

As it happened, I needn't have worried. despite there being a whole extra 90 seconds of running in week 2 compared to week 1, I managed it pretty easily. It seems my rehabilitation back to fitness to allow me to reassume my refereeing duties had done enough to allow me to skip ahead after all.

I'll do the next run, and if that goes OK, I'll move on to week 3 and take it from there.