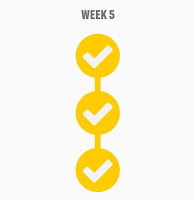 Well, I'll be completely honest with you, like a lot of people when faced with this run, I did not expect to be able to do the whole 20 minutes without stopping at the first attempt; but somehow I've done it.

Up until now, I've been marking time by counting footsteps; which has been fine up to 8 minutes, but wasn't never going to work for 20, so another approach was needed for this run. I decided that the best way to tackle this was to create a playlist consisting of six 5 minute songs; one for the warm-up, one for the cool-down, and the other 4 for the actual run. I still had the app in the background letting me know my progress, but instead of fixating on the time, I just hummed along (mentally) to my chosen tunes and, lo and behold, I ran for 4 whole songs and I was told it was time to stop.

So here I am; in two days time I'll have been back on the plan for exactly a month and I can now run 20 minutes without stopping. Who would have thought it? Certainly not me.

Distance covered was 2.5km, so pretty happy with that too.