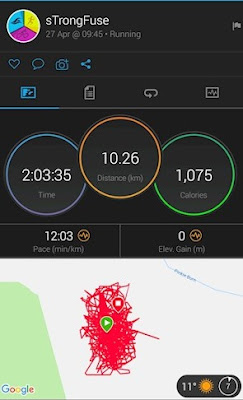 Ask any referee, and we have a love/hate relationship with 7s. On the one hand it's a bit of an end of season blow-off and you can have some lighthearted banter with the players. On the other, it's fast, constant and comes at the end of a long, gruelling season.

Six games, 7 minutes each half, with a two minute turnaround at the break and 5 minutes between games. It's an U18s fixture, so I have at least 30 years on them.

At one point, I'm devastated to discover that I still have one game left as I was already mentally heading for my shower.

In the end 10¼km. Not non-stop, because it's rugby and spread over 12 seven minute periods that are stop-start due to the very nature of the game, but I'm still claiming it.

Just before I started Couch to 5k, I did a 3 match tournament of 20 minute games, one after the other and was practically crawling by the end of it. Today, I added 3k and 20 minutes duration to that and I actually still felt like I had something left.

I've said before, my Couch to 5k journey isn't about the distance, it's about building stamina and endurance. Based on today's evidence, it certainly seems to be doing that.