The lies our tech tell us... 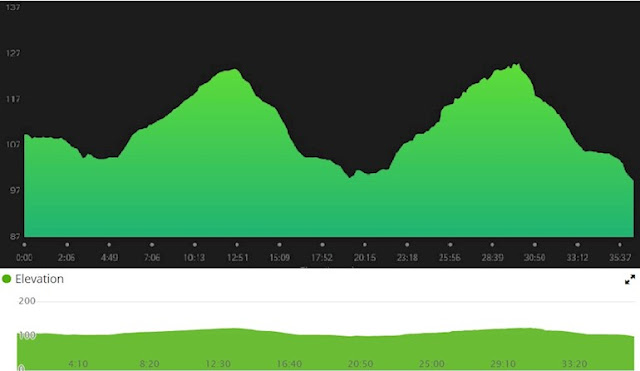 Perspective is important, but it can knock the wind out of your sails sometimes.

Last night's run was a fairly gentle 5k involving two laps following a path out to the end of my village, a country path along the perimeter to the other end of the village, and then back to the start. I've done it many times and, it's kind of my "comfort" run when I'm not really feeling it, because it has about half a dozen exit points where if it's not happening I can tell myself "just to the next branch and see how I feel..." It was was an invaluable trick during the early weeks of C25K and I still use it (although I seldom use the exits) from time to time.

Anyway, I am aware that there is a fairly gentle, but constant climb out of the village and along the old railway track followed by an equal downhill stretch back to the starting point.

On completion, I looked at the elevation profile on the Garmin app on my phone, and was presented with the top chart.

This morning, I was looking at it on the web version on my PC and got the bottom chart.

Last night I took a certain justification at feeling a bit "out of puff" at the end of it, today I'm like "Seriously? That's almost flat..."

My legs definitely believe the top chart more than the bottom one, even if they are representing the same run, just using a different scale.

Don't get me wrong, I'm happy I ran 5k and in something around my average time, but there's nothing like seeing your efforts reduced to almost a flat line to take some of the sense of achievement away.

Anyway, my legs know what they achieved even if Garmin's website is trying to steal their thunder. From now on, if I have to look, I'm sticking to the mobile version...

Rest day today. See how I feel tomorrow before deciding on whether it's the 4k or 9k run of W6.