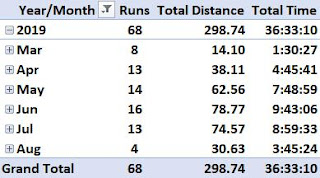 I started the Couch to 5k journey on 9 March. In that time I've done 68 runs and covered just shy of 300km (I'm not including rugby matches and the distance figure includes the time spent walking during the early interval phase of the plan). Not only am I able to run further and faster than I was before I started, I've discovered something I enjoy, that (so far) seems to help with my depression and, has helped me lose about 10kg as well.

Today it was exactly 3 months since I graduated. That evening I admit that I broke the rules and carried on running until I got to 5k; it took me 39:22. I was knackered and elated in equal measure.

As for those 44 runs, well, 30 of them have been 5k or more, including four 10k runs. I've finished 7 parkruns so far and the Edinburgh 5k Race for Life.

If you'd even joked with me back at the start of March that in under 6 months I'd be running 3 times a week covering 15-20km each week, I'd have put good money on that not happening; but here I am.

It is quite amazing what you can achieve with some determination, a good structured plan to follow, and the support of a fantastic community of VRBs.

Anyone just starting, or thinking about starting and feeling that they will never manage should take heart. I was there, with that very same mindset less than six months ago; wanting to achieve something but certain that I wouldn't. I put my faith in the plan. I got support and the occasional motivational boot up the backside from my fellow forum members and, well, the rest, as they say, is history.

If anyone reading this is still swithering, all I can say is give it a go, you've nothing to lose and you might just end up loving it.