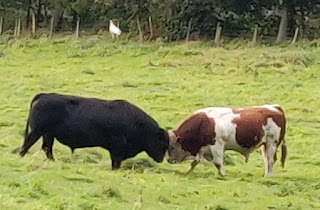 I'm sure we've all had them; those runs where the only positive that can be drawn from them is the fact that we did them. Tonight's run was one of those.

No idea why it was so hard. It's a familiar route, my preparations were the same as always, I'd slept OK last night, I'd drunk my usual amount of water, even my pace (for their first 5k at least) was pretty average; but somehow I never quite found my stride.

Sometimes you just have to keep putting one foot in front of the other and just keep stubborning it out, and tonight that was me. Because it's a circular route, one of the few things that kept me on track was the fact that if I'd stopped to walk, it would have taken me even longer to get home than it did. Even with that "motivation" it was one of my slowest times since I started. Not exactly the way I thought I'd mark my 100th run of the year, but that's the way it goes.

Even my usual spectators got bored and turned their attention to something more interesting (pretty sure that's the bovine equivalent of a Mexico Wave).