Couch to Half Marathon 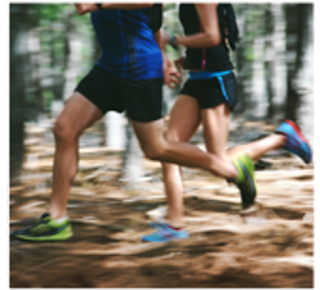 I've always had an awe of long distance runners and I never thought I’d ever be one myself. In part, this was down to the fact that in my early 20s, I suffered a bad knee injury that brought my rugby playing career to an early end and the fact that, while I admire marathon runners’ ability, I had absolutely no desire to be one myself.

Skip forward about a quarter of a century to June 2018. Through the miracles of physiotherapy, and my own stubbornness, I’d managed to get my knee to the point where I could stop/start cover 5km over the course of an 80 minute rugby match as a referee. The problem was that, especially as I got older, I looked forward to the start of each new season with a sense of increasing dread. The fitness I’d achieved over the length of the previous season had, despite best intentions, fallen away, and every season it seemed to take longer to build it back up.

At the end of the 2017/18 season, I had the inspiration to try Couch to 5k to see if I could maybe prevent the inevitable intra-season slump.

As I’ve mentioned, I hated week one. Despite knowing that it should be easily inside my capabilities, those eight 1 minute repeated intervals sapped my soul. I did persevere. Week 2 was easier. Unfortunately it all came undone at that point. Tendonitis flared up in both knees, and that was that. Rest, physio, more rest, more physio. Missed the start of the 2018/19 season and it was after Christmas before I was able to start again.

That was that until March this year. The evenings were beginning to get lighter and I decided I would give Couch to 5k another try. I couldn’t face the prospect of week 1 again so I went back and reran the last run I’d completed, i.e. Week 2 Run 2. There were no ill effects, so I moved on from there.

I wasn’t able to do three plan runs each week. The need for rest days meant that I would run on Tuesdays and Thursdays, and have rugby on Saturdays, but that was fine.

Week 4 Run 2: I made a mess of. Went too fast and couldn’t complete the last running session. I rested, did it again, but slower, completed it and moved on.

April 13. The “infamous” Week 5 Run 3; surprised myself and did the full 20 mins covering 2.72km. That was the first milestone.

Week 6 went without a hitch. Week 7, I had to redo Run 3 (again, down to pacing). Week 8 completed, Week 9 I was feeling unstoppable. Graduated on May 7 covering 5km in just over 39 minutes. Four days later, my first parkrun.

At that stage, I decided to just see where it would take me. I started following JuJu’s "Magic" plan to get me to an hour. I reached the hour mark on 17 June covering 8k. At this point I decided that I would drop back a couple of weeks and follow the distance plan to 10km. During this period I completed the Edinburgh 5km Race for Life around Arthur’s Seat. I ran my first 10k on 1 July.

Since then, I’ve steadily been building. Mostly managing three runs each week; My regular pattern being a long run on Monday night, a medium run on Wednesday night and either a short run on Friday night with rugby on Saturday, or a rest on Friday with parkrun on Saturday.

When I started back in March, my aim was simply to get to a point where I could run 5k continuously instead of stop/start as I do in rugby. I figured that if I could do that in around 40 minutes, it would mean I would have no difficulty covering it in the 80 minutes of the game. I was right, although conversely, because I can now run faster, and am generally fitter, I actually don’t need to run as far to keep up with the action.

Having achieved 5k, my aim was to try and be able to run a full 80 minutes without stopping. My first 10k took me a few seconds short of that, so that was another goal ticked. From there it has really just been a journey to see what this middle-aged man with a dodgy knee can achieve. Last night’s run was probably the culmination of that.

As I said way back at the start, I’ve always been full of admiration for those people who run marathons but had no desire to join their ranks. Having run a half marathon, my admiration has increased but, while I will run halfs again, my lack of desire to run a full marathon is stronger than ever.

Wherever you are on your running journey, I hope this has given you something. We are all capable of more than we believe, it just needs a push in the right direction to set us off. Couch to 5k is just such a push. It doesn’t matter how far or how fast you run, you do it your way. Own your achievements whatever they are and don’t judge yourself against what others can do. We are all different, we are all doing this for different reasons and motivations. We will all have our distance that we decide is our maximum and we will all run it at our own pace. The one thing we do all have in common is that we are all runners, and that’s pretty awesome if you ask me…