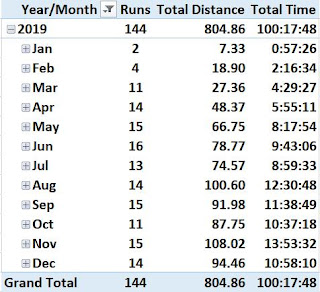 The ancient Chinese philosopher, Lao Tzu, reputedly once said: "A journey of a thousand miles begins with a single step". Well, today, at my twelfth park run, I passed the 500 mile mark for 2019. It's 500 miles that includes:

While I may only have reached half of Lao Tzu's 1,000 miles, the principle still remains the same, it all began with me choosing to take that first step when I embarked on Couch to 5k at the start of the year.

Being a bit of a stat fanatic, for me it's been fascinating watching the distances covered and the time spent running increase as the year has progressed; from running my first 5k in June, all the way up to my first (and to date, only) Half Marathon in November and all the landmarks in between such as:


None of these even crossed my mind as being possible when I laced up mt running shoes back in March and restarted the plan; I genuinely would have been happy to have known that I was going to get to the point of being able to run for 30 minutes.

There is still at least one more running day left in 2019, so hopefully I will break the 100k for the month for the third time before December ends.

In the mean time, I wish anyone reading this health and happiness and many more miles in 2020.