For a number of reasons, January has its detractors. The weather is miserable, it's cold and dark and all the bright lights that marked the end of the year have been switched off. There always seems to be way too much month left at the end of your money and don't even mention the various forms of abstinence that we are either supposed to sign up to to suck what little joy there is out of the month, or feel guilty about for not doing so.

So, yeah, January, cheerio. At least I get an extra day this year before we have to cross paths again.

Well, no. If you live in the UK or other countries that adopt daylight saving time, that honour actually goes to the month of my birth, October and we mostly spend the extra hour we gain in bed.

In one respect, January has, personally been the longest month; and in a good way too. I set a new distance record of 121.2km for the month. My previous highest total had been 108km back in November. In amassing that distance this month, I've run:
Putting this month's achievements into further perspective, when I started C25K in March last year, my cumulative total for the year at that point was only 30.3km. By the time I graduated on 7 May, my total had reached 119.7km. Another way of looking at it is that I have already run 15% of my total 2019 distance of 810km.

So yes, for my poor feet and legs, January has certainly been a long month, but also a very good one.

Let's see where the rest of the year takes us all... 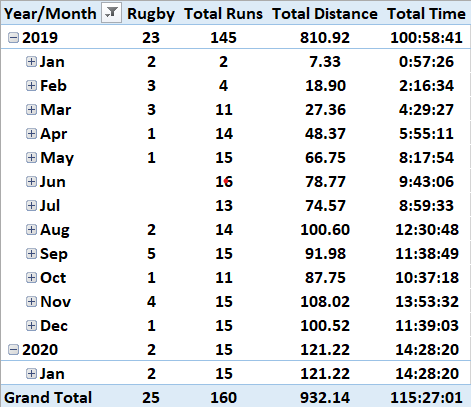