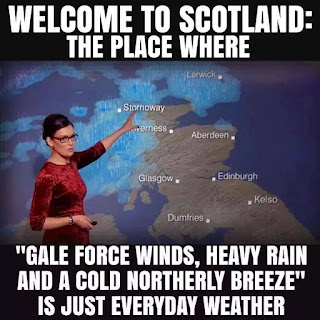 We all have them; those runs where they only good thing we can say about them is that they're done and we can put them behind us.

It was still light, dry and, by the standards of the last week, reasonably pleasant when I left the house this evening. 45 minutes later, it was dark, I was soaked to the skin and chilled to the bone.

Monday night may be my "long run" night, but I wasn't staying out in that for one second longer than I absolutely had to, so when the 5k mark brought me to the end of my street, one very quick cool-down walk (not that I really needed any further cooling later), and I was happy to call it quits for the evening.

I think I can safely say I have never been so happy to get out of my running stuff and into the shower as I was tonight (and I say that as someone who got caught outside in a thunderstorm back in August).

Generally, I don't mind a bit of rain when I'm running, but when it's being driven horizontally into your face by a storm force wind that sprang up out of nowhere just as you reached the furthest away point on your route from home, then I think it's possibly a wee bit too much.