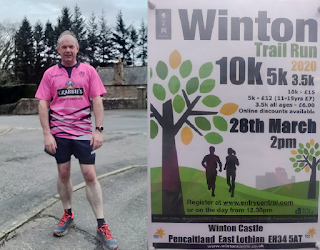 Round about this time last year, when I was just about completing Week 4 of the Couch to 5k programme, I noticed signs going up around the village for the annual 5k/10k trail run. At that point I had still to complete the "infamous" 20 minute non-stop run that would be the climax of Week 5 and the idea that I might, just might, one day, be able to run 5k was still a seemingly unlikely aspiration (little did I know I was less than 5 weeks away from achieving it) and I set myself the goal of doing this year's 5k event.

Skip forward 12 months to today, and I was down to take part in the 10k version (I really did not imagine that this time last year). Sadly, due to the current COVID-19 situation, this year's run, like so many others, has had to be postponed (if not cancelled altogether). Since the run starts and ends more or less on my doorstep, I decided that I would run a version of it anyway.

Unlike last year's event, where the runners had to contend with a torrential downpour, I had almost perfect conditions; mild, a slight breeze, and the ground was reasonably firm and (almost unusually for this particular route) almost entirely puddle free. There have been occasions where I have almost had to wade sections of this path, but today my feet stayed dry.

While I did miss the excitement of being part of a crowd of 500 or so runners, I did enjoy the solitude and the sounds of nature.  At one point I met one of my neighbours running in the opposite direction, but apart from him and a couple of dog walkers, I had the route completely to myself with just the birds and the occasional squirrel for company.

One hour and seven minutes later, and having set a few segment PBs on Strava, it was all over and my daily allowed outside time was over and my 31st 10k was in the bag (not bad for someone who a year ago wondered if he'd ever actually manage to run 5k). Whilst not the event I'd planned to do, it was still good to get out and run it anyway.