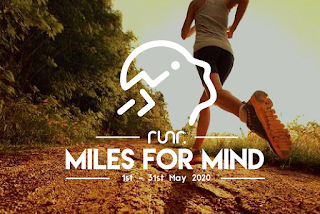 The month of May is upon us and that, of course means that once again it is time for "Miles For Mind" in association with RUNR. With that in mind, what better way was there to open my account for the month than with a half marathon?

My route of choice this morning was the full length, in each direction, of the Pencaitland Railway Path. The route is well maintained, hard-packed earth and quite smooth. There aren't too many hills, but the few that there are can prove quite challenging to tired legs.

That aside, the conditions were pretty much perfect and I set off with a spring in my step. The kilometres clicked by as they do. I reached the western end of the path after 8k, turned around, and the 10k point was reached in 1:01:43 (which is my second fastest 10k).

The 10 mile mark was reached just as I passed my original starting point heading towards the eastern end of the path. The time at this point was 1:40:48; a new PB with an improvement of just over four minutes on my previous best that I set at the start of April.

The remaining part was a fairly easy 1k climb, followed by a 1.5k descent which, while nice to be doing at this point, was going to torture my poor legs when I had to run back up it in a few minutes.

Reaching the end of the path, I gritted my teeth and headed back up that hill. It was the longest sustained period of "up" of the entire run (the lesson here being: if I ever do this route again, do the east section first) but that did mean I had a very welcome 1k downhill dash to the finish (which somehow managed to be the fastest kilometre of the entire run).

On the whole, a pretty good start to my Miles for Mind campaign. If you would like to support me, I have set up a Just Giving page where any donations you are able to make would be gratefully received.