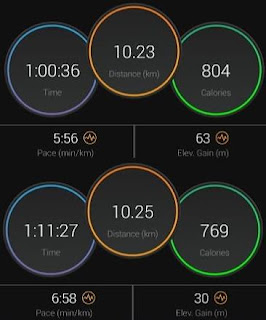 On Saturday, a twitter friend was celebrating having got up early and smashing her 10k PB. as it was nearly lunchtime when I read her post, I congratulated her on her achievement and commented that given the temperature, there was no chance of any PBs happening on the run I was about to head off on.

It turns out, I lied.

I ran only my second ever sub-60 minute 10k, setting a new PB of 58:19. To say I was pleasantly surprised would be the understatement of the year.

Tonight, I went out for another run; 10k again. There was less elevation, I was deliberately taking it slow, but dearie me it was a tough one.  I was well rested, well hydrated; it was actually cooler than Saturday, but I was obviously still experiencing some sort of hangover from my weekend exertions.

Not to worry though, it's still another run in the legs and under the belt, taking me to 55k so far for the month.

May 29, 2020
At the start of the month I set myself a #MilesForMind target of 75 miles. Having started my assault on that total on Saturday 2 May with a half marathon, twelve runs later, I completed the task tonight with a 5k in glorious sunshine to bring my total to 75.59 miles. It's not impossible that I might squeeze one more run in over the weekend to stretch my total further, but those will be bonus miles; the target I set myself has been achieved, and I'm feeling decidedly chuffed with myself. To anyone reading this who still has to reach their own target, good luck over the next few days. Happy running and stay safe. If you feel like "congratulating" me, please do visit my Just Giving page and give whatever you can.
Post a comment
Read more

August 23, 2020
Sometimes this running thing throws up occasional pleasant surprises; the unexpected additional distance or the unintended PB. Today's surprise was discovering that I'd managed the "holy grail" of negative splits. I wasn't aiming for a fast time; I'd already done a 7k+ session with my Sunday morning running group and this was simply a solo after-group session that has become my traditional "scenic route" home from the park where the sessions are held. The route is one that I have run many times (although usually in the other direction); a mixture of roughish forest path and hard packed dirt former railway foot/cycle/bridle path. I wasn't putting any real effort into it; just simply zoning out, plodding along enjoying my surroundings. I wasn't paying any attention to the timings when each kilometre split buzzed on my wrist. The was no "pressure" on me to achieve a particular time, pace or distance. The thing with doing a route that i
Post a comment
Read more

April 14, 2020
I know I've been pushing towards it lately, and having reduced my 10k PB down to 1:02:07 l ast time out , and having not had the best couple of days, the last thing I expected was to go out and better that time tonight. If truth be told, I wasn't even sure I was going to run that far tonight but, once again, my legs seemed to have a will of there own and as the kilometres clicked by, I realised something was going to happen, and when I reached 6k in a shade over 36 minutes, I knew it was potentially on. The final 4k flashed by in just under 23 minutes and I "broke the tape" at 58 minutes 58 seconds. The result of this means that my PBs are now: 5k - 28:04 10k - 58:58 10 miles - 1:44:54 HM - 2:21:21 I'm not quite sure where this new burst of pace has suddenly come from, but needless to say I'm absolutely delighted with it. I need to set myself some new year end goals, but that's a nice "problem" to have, I guess...
1 comment
Read more