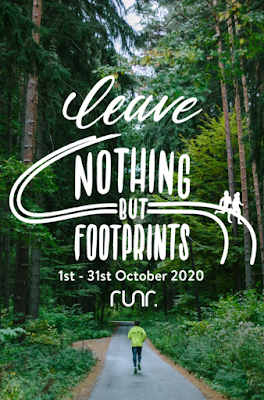 Like a lot of people, back in May, I signed up for Miles For Mind, organised by runr, and managed to push myself to 75 miles for the month. I had actually run slightly further than that in both March and April this year, but this was the first time I had set a target for the month that I was essentially accountable to anyone other than myself for achieving and I did it with a little over a mile and a quarter to spare.

The team at runr decided that this year they would organise their first autumn challenge, #LeaveNothingButFootprints. Yet again, this would be in aid of the charity, Mind UK. Now, while Mind are a fantastic charity, they don't currently operate in Scotland but, because mental health is a cause that's important to me, I wanted to get behind this so, instead, I dedicated my fundraising efforts on behalf of the Scottish Association for Mental Health (SAMH).

October 10th was World Mental Health Day and, by a spooky coincidence, October was the month where I clocked up 50 years of existence on this planet so I set myself the symbolic target of 50 miles and signed up.

Now, 50 miles is a distance I knew I could run; I had after all ran 75 miles back in May. In fact, either because or in spite of the corona virus restrictions we've had to endure this year, my monthly average over March - September has been a bit over 80 miles/month.

Almost inevitably, I reached the 50 mile mark with half of October still to go, so I thought why not try for 100 miles instead?

Tonight, after 15 runs (including a 5k on my birthday, a half-marathon personal best of 2 hours 8 minutes two days later and a 10 mile two weeks after that), I broke through that 100 mile mark, making this the furthest I have ever run in a single month (and I still, potentially, have one run left to squeeze in on Saturday).

So, it has been quite a month and, at the moment, I'm feeling quite emotional. I think I may even have a cheeky celebratory beer just to savour the achievement.

If you would like to support me, and more importantly, SAMH, please visit my Just Giving page.