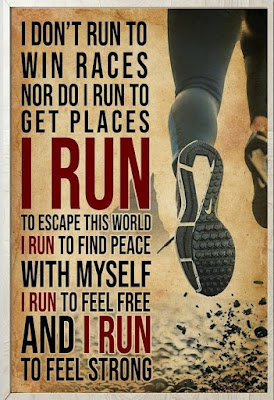 Two years ago, having finally shaken of the tendonitis that had put paid to my first attempt at the Couch to 5k plan, I finally put all the excuses behind me, laced up my shoes that had been gathering dust since I unboxed them at Christmas, and started my running journey in earnest. There were a couple of "training runs" along the way, but I completed the programme in May 2019 and quickly moved on to JuJu's 10k plan which got me to 10k on 1 July that year. Before 2019 was finished, I'd get to 10 miles in October and my first HM in November and, by the time the bells rang in 2020, I'd clocked up over 500 miles.

Well, actually, from a running perspective, it turned out better than anticipated. Yes, OK, so the final parkrun was a year ago this weekend just past, and all the organised events I'd entered were cancelled or postponed until some indeterminate point in the future, but running, it seemed, was an escape and helped my cope with the whole general topsy-turveyness of it all, so I kept on running.

I entered lockdown running 20-25km each week and by the time the year ended, I'd run a shade over 1,000 miles during 2020, including another 6 half-marathons, completing a JoGLE challenge in November and was averaging 30-40km on a weekly basis.

2021, despite the snowy conditions in early February has continued where 2020 left off. 29 runs completed, covering just over 200 miles so far and an average distance per run of just over 11km (helped, in part by half-marathon #8 a couple of weeks back).

Two years ago, I was almost 18kg/2¾ stone heavier than I am today, and I doubted if I would make it to 30 minutes and/or 5k; 10k seemed like an almost impossible goal. Beyond 10k, I didn't even consider. Even when I started the 10k plan, I wasn't sure I'd actually get there and, once I did, I suspected that it would be an occasional thing. Little did I realise that, in less than two years, it would pretty much be my "go to" starting distance and not my occasional maximum.

It's fair to say that my ability to run further and for longer and to keep piling on the miles over the past two years in ways that far surpassed my own expectations.

In addition to the weight loss and the improvement in my overall fitness, my mental health has, despite the uncertainties of the world we live in, been boosted to the point that I have been ant-depressant free for 9 months, having previously been on them since 2004.

I realise, a lot of this is down to me and my own personal drives and, in no small measure, my quirks, but the difference in such a relatively short time (relative to my 50+ years on the planet) is nothing short of transformational.

All of us are on our own journeys, and this has been a very short summary of mine. For those who have followed me on this journey, I owe a huge vote of thanks for the support and encouragement. For those encountering me for the first time, I hope this provides some inspiration.

My key tips would be:

I could probably waffle on even more, but I'll leave it there.

Happy running and now, more than ever, stay safe.