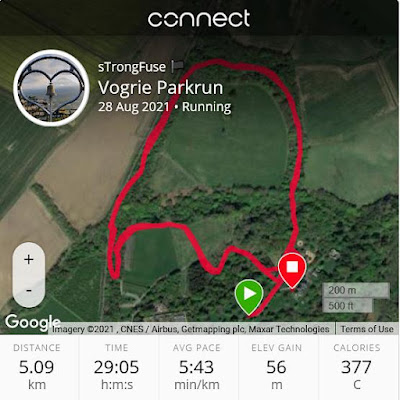 Having given last week a miss on account of the fact that my legs were still feeling a bit sorry for themselves after taking on the Yorkshire 3 Peaks the day before, today it was back to my familiar stomping ground of Vogrie Country Park for the second time since Parkrun returned to Scotland a fortnight ago.
Last time out, I set an all-time Parkrun PB of 25:58; this week I was a wee bit slower at 26:49 but, actually, I was happier with this run. It felt better, my pacing was much more consistent, and I wasn't dead on my feet in the finishing funnel. Maybe it's something to do with running in a group (which I almost never do) but it's funny that I can comfortably pace 10k - HM, but 5k often catches me out. It possibly also has a lot to do with the fact I seldom run less than 10k and today was only my fifth run below that distance this year.
Anyway, I digress. It was a lovely day. The early autumn sunshine was pleasantly warm, the track was generally dry underfoot and, all in all, it was a good run.
As I've commented before, since Parkrun (and lower league rugby) were suspended, over the past 18 months, Saturday has become my long run day. Today, as with two weeks ago, having got home from Vogrie, I went out and did another 6½k just because my legs needed a little more punishing. As it turned out, that second run meant that I hit 875 miles for the year meaning I've successfully run the length of the UK from John o' Groats to Land's End in a little under 8 months. By way of context, in 2020, it took me until mid-November to cover the same distance. Now, I suppose, the challenge is to see if I can get to 1,000 miles for the year before my birthday in early October.
Today's run also took my August Miles For Mind cumulative total to 99.5 miles. If I'd known I was that close to 100, I'd have kept going, but hey ho, such is life. I've two more runs to fit in before the month is over, so I think I should break that barrier.
Anyway, that's enough whittering from me, hope you all have a great weekend. Happy running and stay safe.
Oh, and for those of you who have followed me for a while, next month will see the return of the (in)famous "Saturday Squiggles".