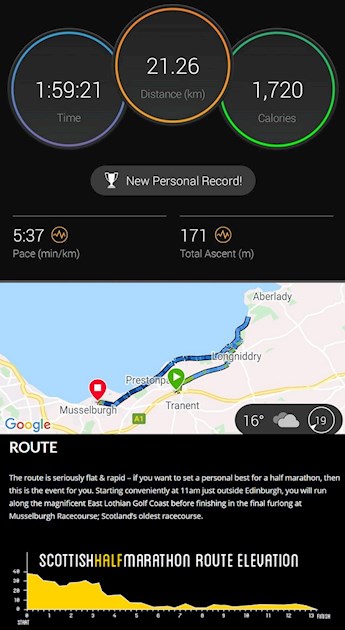 So, given that as recently as Tuesday, I wasn't sure if I'd be fit to even start the event, my goal was really just to try and ease myself round without aggravating my back which had, thankfully, pretty much settled.

The "easing" bit, of course, went out the window as soon as I passed the start line, and I quickly settled into my familiar internal shouting match where I kept telling myself to slow down and get a grip of my pace.

It had been predicted to rain, but thankfully that held off and the conditions were almost perfect, about 15°C, dry and only a light head wind for part of the second half of the run.

The event bills itself as "Fast, flat & picturesque". Despite that, there are a few gentle inclines. The "picturesque" I can't argue with as it's the part of the world I live in and the start is less than 3 miles from my front door, but, to be honest, I wasn't really taking the scenery in as it all went past in a bit of a blur. Fast? Well, judge for yourself...

My official chip time is 1:59:06, which is 5 minutes faster than my previous PB. I wanted to go below 2 hours, so this ticked that box handsomely.

Along the way, some of my other PBs also fell and so, thanks to this run, these now stand at:

All in all, absolutely delighted with this run. My first "official" HM but my 13th time over the distance and it certainly wasn't an unlucky one.