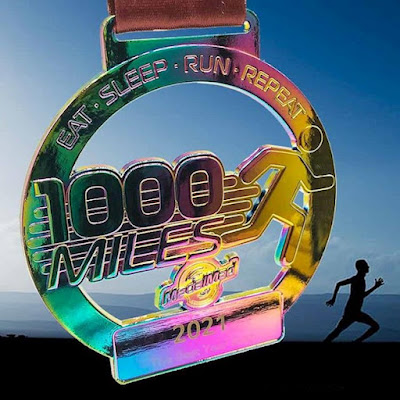 I've been having something of a hectic time, so haven't had time to share this one.

Last year, I clocked up the 1,000 mile mark on 30 December. This year, I hit that particular landmark on Saturday. I'm not running more often this year, still typically heading out 3-4 times a week; the difference is the distances.

Last year I was averaging around 30km each week with one run being 10km or longer, but the rest being much shorter. This year, I'm averaging around 40km each week, with 10km being my starting distance. My average run distance this year is just over 12km compared with 9.5km last year.

As an "after work" runner, I'm now moving into the night run season, which brings its own challenges. The Hi-Viz vest and headlamp have been dug out of the drawer (haven't been needed yet, but I suspect by next week they will) and the merino base layers have already made their first appearances.

So onwards we go, running down the remainder of the year.

Good luck to anyone with events coming up, and, as always, stay safe.