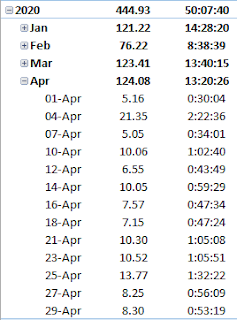 So, April... The month of lock-down and Zoom. The month of social distancing and solitary running. The month (for me) where I set a whole pile of personal records.

I came into April with the following PBs:
I ended the month having bettered them all.

The first to fall was my 5k time. I set out to do some speed intervals and, by the time I finished, I'd brought my time down to 28:01.

My 10 mile and HM records fell on the same run. My goal for this year had been to get my 10 mile time below one hour 45. as the distance ticked along, I realised there was a possibility that it might just be on, so I went for it, plotting out my route in my head as I went, trying to avoid having to run up hills as much as was possible. As my watch ticked past 16.1k, I scraped by with seconds to spare: 1:44:56; but I wasn't quite finished. At that point, even if I'd slowed to my usual walking pace, my HM PB would have fallen, but I wanted to see how much I could shave off, so I went for it in the final 5k with all the pace my legs could still manage to muster (again, trying to plot a route that didn't punish them with too much climbing). In the end, I shaved nine minutes off the time above and set a new mark at 2:21:21.

My 10k time has been in place since the Edinburgh Men's 10k on 3 November last year. I'd got close to it a couple of times since, but it had been looking stubbornly unassailable and, after the efforts above, was still the only one still in place. It finally fell on my second run out (and first 10k) after the above 10 mile/HM.  Four days later, it fell again, and I went under an hour for the first time posting a mark of 58:58.

Last night was my final run of the month; a pretty leisurely 8.3k lollop through woods, across fields and along paths. Apart from improving my time on the odd Strava segment along my chosen route, there was nothing particularly notable about the run in any way. It did, however, bring my distance total to 124.08 Km for the month, meaning I set a new record for the total distance run during a single calendar month; which seemed like a very fitting end to a month that has been stuffed with personal achievements.

So, what of the month to come? Well, a week from today will be the first anniversary of my  Couch to 5k graduation run, so I guess I'll have to find a way of marking that occasion. Other than that, I'll just have to see what's what when I get to the end of May.