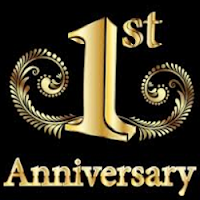 .
On 1 July 2019, I ran my first ever non-stop 10k. I qualify the "non-stop" bit because several weeks earlier, before I'd even completed Couch to 5k, I'd covered just over 10k refereeing a rugby 7s tournament. It was stop start, spread over six 14 minute games, but I still include it in my distance totals. Anyway, I digress; 1 July was the day I completed Ju Ju's Magic 10k Plan over on Health Unlocked's Bridge to 10k Forum, so that's the day I'm counting. The time that evening was 1:19:36.

Tonight, one year on and not including the rugby tournament mentioned above, I completed my 58th run of 10k or more. When you consider the that 4 of those 58 runs were half-marathon distance, I've actually completed the 10k distance 62 times in the last 12 months. Tonight's time was 1:04:51, which is a bit off my PB of 58:58, but that wasn't what I was aiming for tonight given the conditions underfoot following several days of rainfall including some spectacular thunderstorms were not exactly conducive to especially fast running, even if I had been trying to mark the occasion with something "special". The paths that last week were solidly bone dry, are now somewhat squelchy and waterlogged and the best you could possibly describe the going as was "soft".

It was for this reason that, unlike my Couch to 5k anniversary run,  I didn't attempt a direct comparison tonight by running the route I took last year; the aforementioned rainfall having made some of the route I ran last year impassable. Suffice to say when you compare the time from that first run with tonight's attempt, and factoring in my current PB, I think it's fair to say that a decent amount of progress has been made.

I'm still marvelling at the distances I can now run and the fact that just over a year on from when I was consolidating 5k, my typical distance that I run on most occasions is now 8-10k. I'm still not sure my legs will ever forgive me though.